So, I feel a bit remiss. I posted about my first metal concert and failed to post about some talent in my family. In my defense, there is a difference because I was posting about a “first”. I have lots of special nephews, but I am talking about this one at the moment. It does not mean I am not as impressed with my other nephews and their talents. So, other nephews…. no jealously allowed!!! I love you all equally the same.

Anyway….he first impressed me because I hoisted this little boy on my lap in his cute brown corduroy bibs with either a blue or green flannel shirt. Talk about total cuteness!!! I proceeded to read him a book while rocking him. His mother quickly told me he would never sit there and listen to me, let alone go to sleep. Well, he snuggled right up and I began to read. He would look up at me occasionally with those big brown eyes and what a feeling that was. He did intently listen to me and actually did fall asleep. Talk about tugging on my heart strings.

This is not when and where I read to him, but this picture reminds me of it even if he is not as young and is not in his bibs. 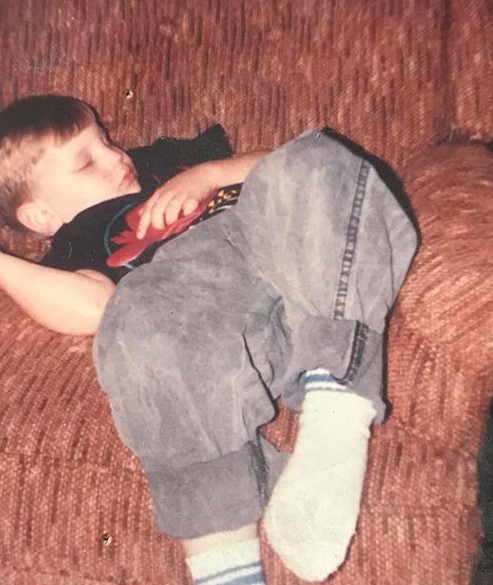 This little boy grew up to be a multi-talented young man. I believe he began in high school, but it may have been earlier. He took an interest in art and just started drawing pictures. Wow! The pictures he drew! He still draws pictures and is very, very good. I can remember when my brother called me and said that Seth had taken up drawing and was instantly good. He went on and on about how I should see his drawings! If I am not mistaken, he was a natural and was pretty much self taught.

My brother called me another time and said Seth has bought a drum set and he just stays up in his room drumming all day long. He went on to tell me that I should hear him because he is really becoming pretty good. My brother LOVED drums. He even sort of made his own set of drums and played on them daily. I wonder why he never got a real set and did anything with it? He even would sit at a table and using all of his fingers, would “drum” along with a song. Well, now he has a boy doing the same thing but with a real set. He would call and ask if I could hear him through the phone and go on and on about him. I think that he taught himself to play the drums and then went on to teach himself how to play the guitar.

Seth has written some songs and has played in some bands. He is in a band today, as well. He performs at open mic and sings karaoke. When he comes home to visit, we sometimes make it to karaoke. He always will sing a song for his mother and includes one for Aunt Debbie. The karaoke DJ always asks if Seth is coming when he sees me. He gets so excited when I say yes Seth is coming. When Seth goes up to sing and the crowd hears him, they are stunned and actually turn around in their chairs to see who is singing and some even stand up when he performs. He is that impressive.

He has such a range, he can sing AC/DC better than AC/DC. Haha. If you are not looking, you would think it was them! It is the same with Chris Stapleton, you think it is Chris up there when he sings his songs. He was the praise leader at his church here in town until he moved. When he comes to visit, he always visits that  church and surprises his grandmother with a song. See what I mean by the range he has?

AND… no matter your age, Seth, I still see that little face of yours and you dressed as I described earlier and always will. It is just like it was yesterday to me! We all love you, Seth.

If any of you ever get the chance to hear Seth perform, you would not be disappointed! I think he is in a band now named Close to Spectacular. I am not sure, but I do know that HE is close to spectacular!